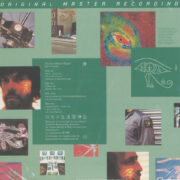 The opening track to the Alan Parsons Project's Eye in the Sky remains the most recognized instrumental in sports – fanfare inseparably tied with introducing NBA legend Michael Jordan and his six-time world-champion Chicago Bulls mates before games, and still used by many teams as an energy-raising prelude. Indeed, the subdued grandiosity, cosmic bluster, and lights-out wonder of “Sirius” also sets the table for the band's smash 1982 album, whose hallmark smoothness, lushness, and balance reach epic heights on Mobile Fidelity's analog reissue.

Availability: Out of stock